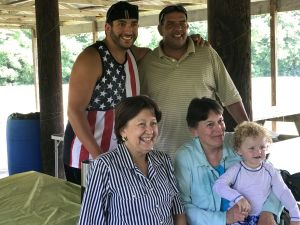 This weekend was another great gathering of Marchand, Guillet and Lynn families.  Aunt Martha Marchand celebrated her 70th birthday party at the river in Staunton. We’ve been looking forward to the party for weeks!  Luckily, the party weekend lined up nicely with a visit from my Father, Nil. Nil and his sister (Aunt Gloria) drove in from Connecticut on a sunny and bright Friday the 13th of July.  Almost a year from when this all began and we all met for the very first time!  Gloria was meeting Martha in Winchester and staying over there for the weekend, so Nil dropped her off there and then headed another 25 minutes East to Purcellville for our weekend visit.

Friday night, we took Nil to Charlestown Races for dinner and horse races! He was very surprised and delighted. We had an awesome time catching up over dinner while the ponies ran!  We could not pick a winner between the 3 of us so we gave up and went home around 10.

Saturday morning we ran a few errands and I took Nil to see Steve’s folks for a few minutes.  I also introduced him to Nichol’s Hardware. A true destination in Loudoun County. It was hard to get him out of there!  At noon we went to the party about 45 minutes away in Staunton at the pavillion on the river. What a great turnout Aunt Martha had!  My Mom Pat, sister, Deena and great nephew Luke were invited too. It was the first time I’d seen Jeanne, Cecil, Vic and John since Christmas.

In March, we moved from our historic home in Hamilton to a “newer” 1989 built home on the golf course in Purcellville.  That, on top of an extremely busy work schedule,  has kept us hopping. At the party,  I caught up with new friends and family and we all enjoyed watching the kids running around having a ball.

Nil and I headed home before dark where we caught up with Steve. We visited for a few hours sitting on the deck watching the fireflies.  We had a great time catching up. Nil was very helpful with a few minor household projects. Some we completed others we did not (needed more parts!)  What a great weekend.  In the last year, my family has tripled in volume,  but it’s a great, warm feeling that everyone gets along and includes each other on the gatherings. I could not ask for a better outcome or response from such loving, wonderful and caring people. All of them…my family.

Until we all meet again!

View all posts by kellyg8n

This is a text widget, which allows you to add text or HTML to your sidebar. You can use them to display text, links, images, HTML, or a combination of these. Edit them in the Widget section of the Customizer.